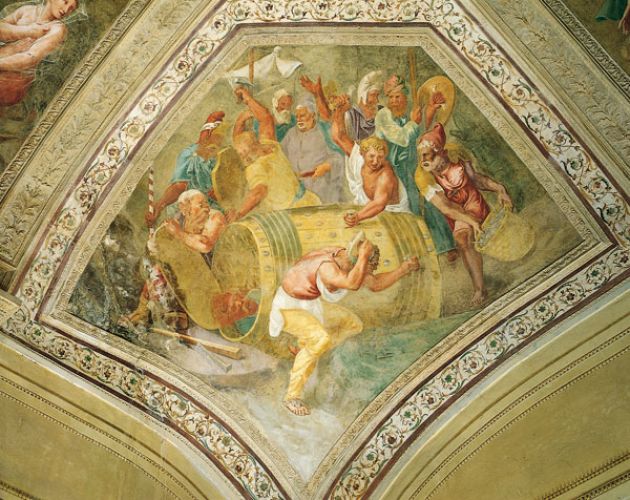 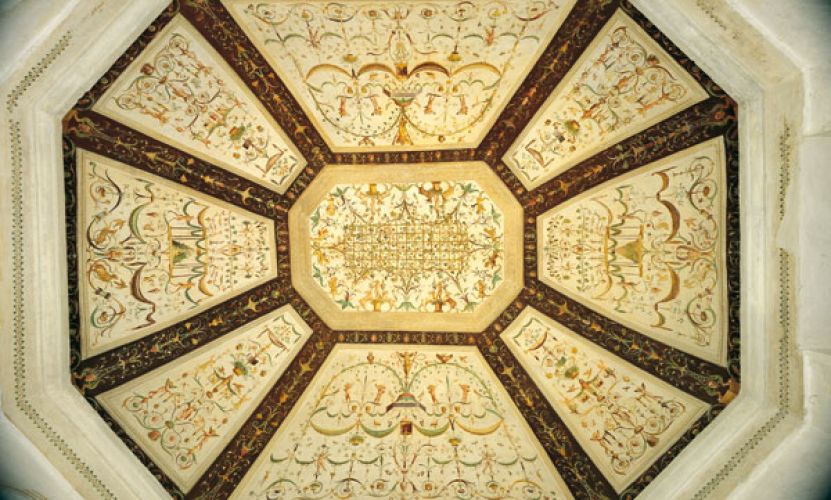 The apartment, overlooking a secret garden from which it takes its name, was created by Federico II as an intimate and secluded place. The elongated octagonal vestibule connects the chamber of Attilius Regulus to the loggia and the garden. The pavilion vault of the vestibule, decorated with fine grotesques, is animated in the central octagon by putti picking the grapes of a vine pergola. The device of the Olympus appears twice in the ribbings of the vault (west and east walls). The floor is made of river pebbles (which hide the openings of tubings used for water games). The door opposite the entrance of the vestibule leads into the chamber of Attilius Regulus, the room that owes its name to a scene on the vault depicting the Roman commander. An Allegory of the Good Government is frescoed in the octagon at the center of the ceiling. Heroic episodes taken from the classical antiquity are painted on the rest of the vault : The Torture of Attilius Regulus (north west corner); The Judgment of Zaleucus (north east corner) ; The Mercy of Alexander the Great (south east corner); Horatius Cocles swimming in the Tiber river (south west corner). Four personifications of the Virtues, frescoed in rectangles, are paired off with these stories of heroes: Attilius Regulus is preceded by a female figure that could refer to the idea of keeping one’s given word, Zaleucus is preceded by Justice, Alexander by Charity and Horatius Cocles by Fortitude. At the top of the walls, enclosed between corbels, four stucco bas-reliefs depict other allegorical figures of virtues.
The pictorial decoration of the walls, the fireplace and the floor are from the late Eighteenth century.
The apartment had its original access from the Large Chamber, with adjoining small rooms (camerini), now under restoration. 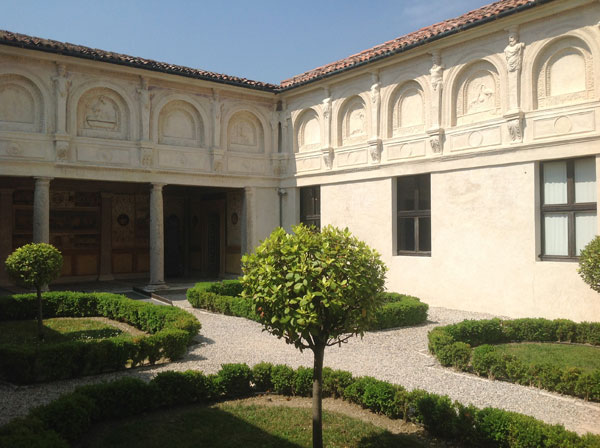 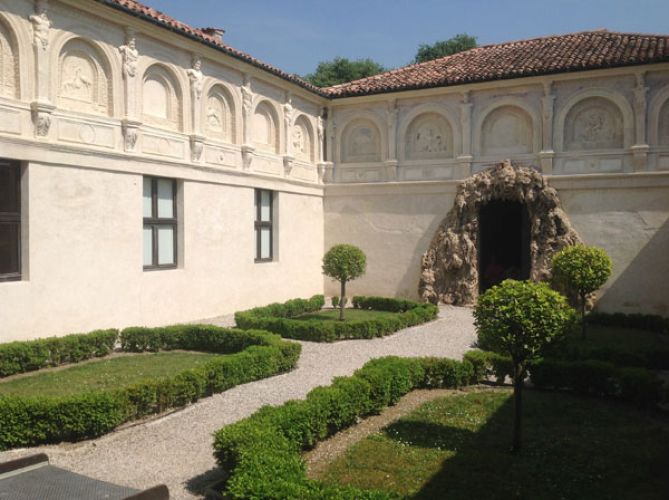 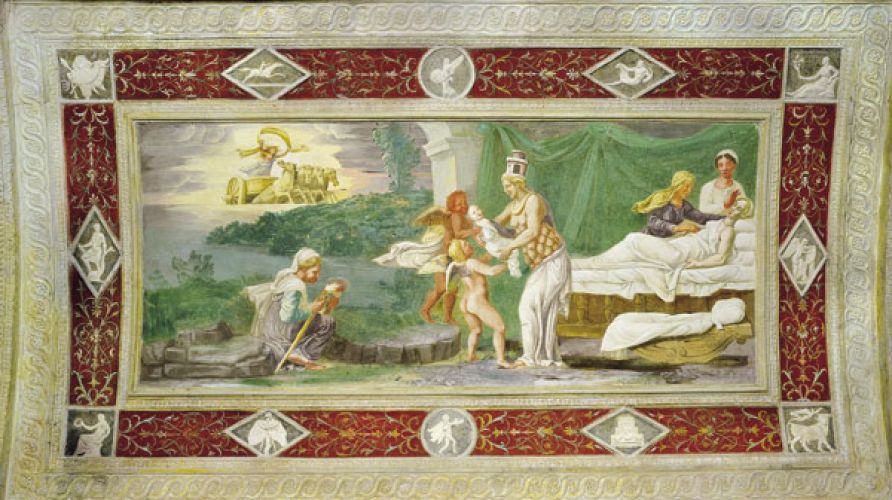 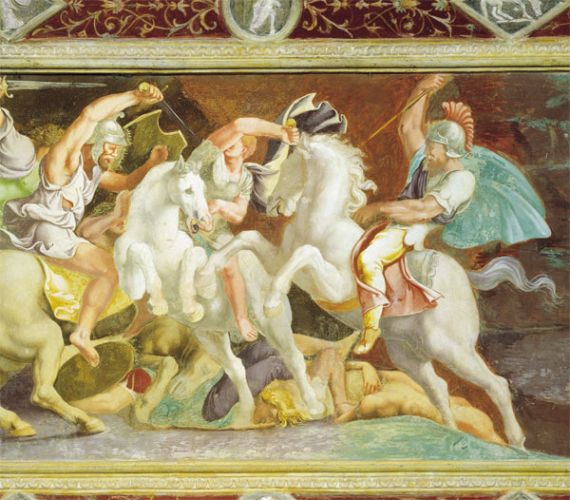 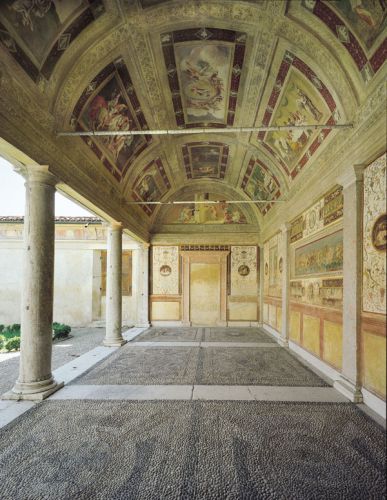 The Loggia, which overlooks the secret garden, is an extremely elegant place with a three-opening colonnade and precious decorations on the walls and the vault. The nine sections of the ceiling and the lunettes have frescoes with scenes of a story, probably referring to the cycle of life of men.
The long south wall is tripartite: in the side compartments are Bacchus and Ariadne (towards the front door) and Silenus on a chariot (towards the outer balcony); the middle section is frescoed with the Wedding Procession of Peleus and Thetis. Above and below it are the devices of Mount Olympus and Cupid in the small Wood.
The floor, made of river pebbles, is adorned with the devices of the Gonzagas. On the east side of the Loggia there is a pleasant balcony, decorated with stuccoes and paintings.
The garden was decorated circa 1531. The walls were originally painted with landscapes in perspective, that are today lost, apart from traces of incisions on the plaster of the north and east side. The frieze running along the walls of the garden is decorated with alternating herms and niches. The niches are alternately painted or plastered with subjects taken from Aesop’s fables, the only exception being the niche dedicated to the tomb of Federico’ s puppy in the middle of the south front. Moving clockwise, from the south wall, are shown: The Donkey and the Dog; lost fable; The Lion and the Mouse. West wall: lost fable, The Fox and the Crow; lost fable; The Fox and the Stork; lost fable; The Horse and the Lion; lost fable; The Fly and the Bald Man. North wall: The Dog with a Piece of Meat; The Wolf and the Carved Head; lost fable; The Lion and the Shepherd; The Shepherd and the Wolf.

Apartment of the Secret Garden: Grotto 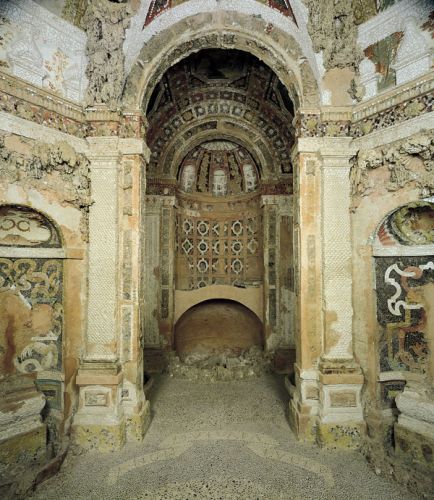 The Grotto, with its opening built with real rocks, was commissioned by Duke Vincenzo I Gonzaga at the beginning of the 1590s, and was completed in the early 1600s by his son Duke Ferdinando.
The place consists of two communicating rooms once embellished with water works.
The complex rocky decoration is enriched by shells, coloured stones, mother pearl and crystals, giving the impression of space carved in the earth itself.
In the first larger room there are niches decorated with devices of the Gonzagas: Two Addossed Letters ‘C’ (north west corner); Melting Pot (north east corner); Crescent Moon with the motto “SIC” (south east corner); Phoenix (south east corner). Above the doors there are frescoes depicting sea horses.
The second smaller room has a barrel vault, with three octagons showing episodes from the story of Alcina, taken from the Orlando Furioso by Ludovico Ariosto: Alcina Fishing (west wall); Alcina Meets the Knights (in the centre); The Flight of Alcina and Astolfo (east wall).
The niches of the second room depict symbols referring to the four elements: a blossoming tree (Earth); a flaming volcano (Fire); birds (Air); a dolphin (Water). These symbols allude to the transformation of matter through magic and alchemy. The two paintings above the niches depict sea battles.. 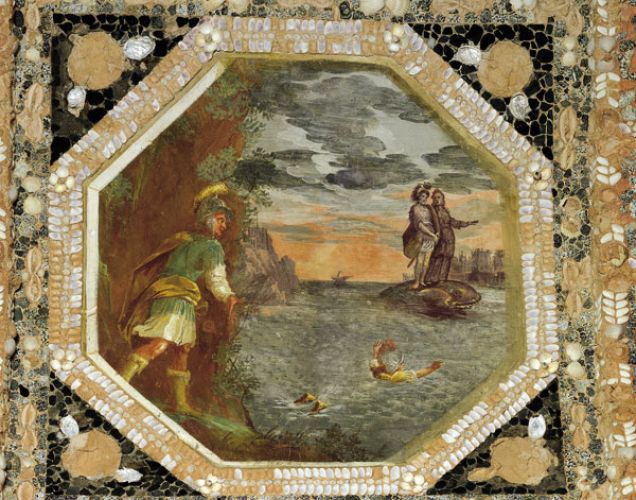