Chamber of Cupid and Psyche

Chamber of Cupid and Psyche 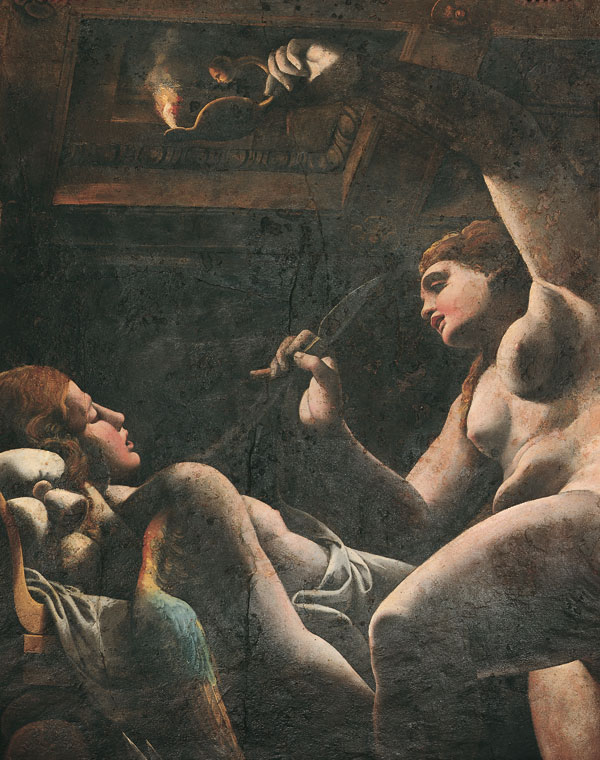 The room, the most sumptuous of the palace for the richness and value of its decorations, owes its name to the story of Cupid (“Amore”, i.e. “Love”) and “Psyche”, taken from the Metamorphosis by Apuleius, narrated on the vault and on the lunettes.
The room, called “camaron quadroon” (i.e. “large square chamber”) in a sixteenth-century description by Jacopo Strada, was reserved for the most prestigious visitors.
Along the ledge that runs under the lunettes, starting from the East wall that holds the red Verona marble fireplace, you can read the inscription that lists Federico Gonzaga’s titles and honours and the villa’s purpose, destined to the Duke’s “honest leisure” after the efforts of the government duties : “HONESTO OCIO POST LABORES AD REPARANDAM VIRT[utem] QVIETI CONSTRVI MANDAVIT” (i.e.: “ordered this construction for his honest leisure after hard labours, to regain his strength in peace”).
The episodes of the Story of Cupid and Psyche start from the octagonal coffer on the West side of the vault, with the chariot of Venus: the goddess, jealous of Psyche’s extraordinary beauty, orders Cupid to punish her. The plot, continuing untidily on the vault and on the lunettes, finds its happy end in the central lacunar of the ceiling where Jupiter officiates at the marriage of Cupid and Psyche, celebrating their new love.
The South and West walls depict the preparation of the country banquet, with Cupid and Psyche joined by their daughter Voluptas (“Pleasure”), lying on a bed (South wall).
Other mythological tales, which narrate of tormented love, decorate the North wall, Bath of Mars and Venus (on the left), Bacchus and Ariadne (in the centre),Venus and Adonis (on the right) and on the East wall, Jupiter seducing Olympias (on the left), Polyphemus, Galatea and Acis (in the centre, above the fireplace), Pasiphae and the bull (on the right).
The paintings are dated between 1526 and 1528. The “terrazzo” floor is from the late-eighteenth century.
admin2019-10-02T18:15:21+02:00