Chamber of the Eagles

Chamber of the Eagles 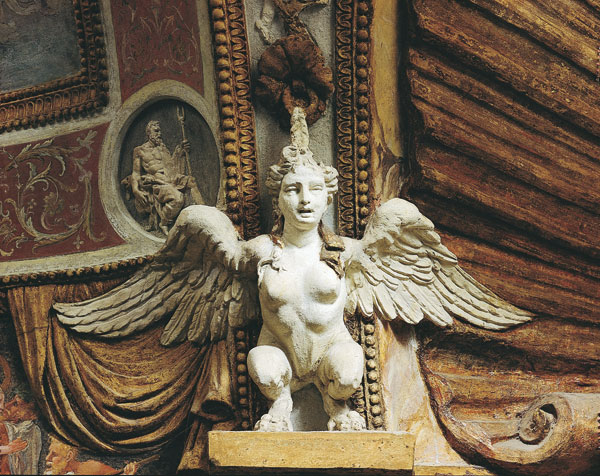 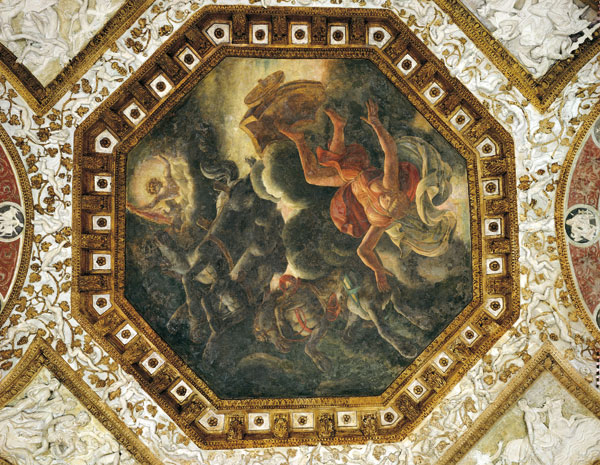 The room, used as a bedroom by Federico, owes its name to the four large black eagles with spread wings in the corners of the room.The sumptuous decoration of the vault, dated between 1527 and 1528, alternates stuccoes and paintings. The top of the ceiling is dominated by a central octagon in which The Fall of Phaeton is painted. Francesco Primaticcio modelled the decorations around the octagon, such as the vine branches inhabited by playful putti and the four fine bas-reliefs depicting: Jupiter transformed into a bull, kidnaps Europe (South-East corner); Mercury in front of Jupiter, Juno and Neptune (South-West corner), Pluto abducts Proserpine (North-West corner), Neptune kidnaps Amphitrite (North-East corner).The four lunettes painted and decorated with stucco, which seem to rest on corbels adorned with harpies, are alive with mythological scenes. Underneath the lunettes four refined frescoes depicting: Fighting between animals and monsters (East wall); Sea Battle (South wall); Amazonomachy – Battle against the Amazons (West wall ); Centauromachy – Battle against the Centaurs (North wall).
The frieze on the walls, adorned with three marble busts of women, is decorated with stucco trophies and oval reliefs in the corners, representing: David with the Head of Goliath (South-East corner), Victory writing on a shield (South-West corner), Judith with the Head Holofernes (North-West corner), Hercules (North-East corner). The elegant ‘lumachella’ marble (a.k.a. fire marble) fireplace is from the Trentino Alps. Even more valuable are the doorframes made in Greek ‘Portasanta’ marble (i.e. ‘Marble of the Holy Door’), so called because it was used in 1525 to carve the Holy Door of St. Peter’s Basilica in Rome. The dedicatory inscriptions on the fireplace and on the lintels of the doors recall the titles of Federico.
admin2019-10-02T18:11:53+02:00