Chamber of the Stuccoes

Chamber of the Stuccoes 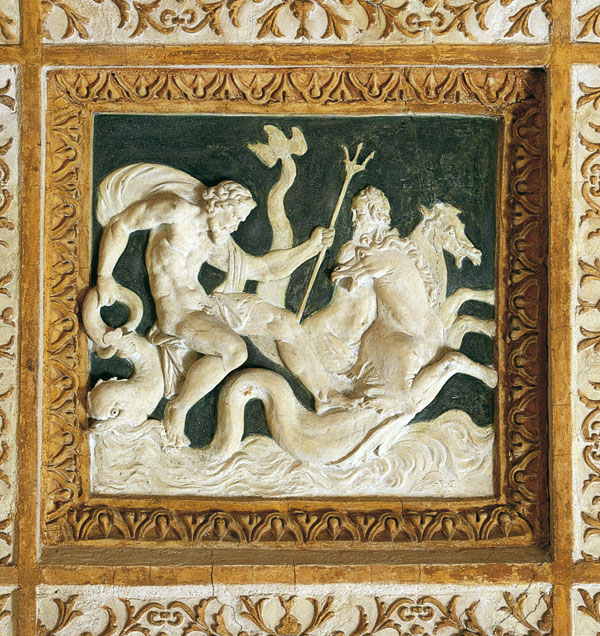 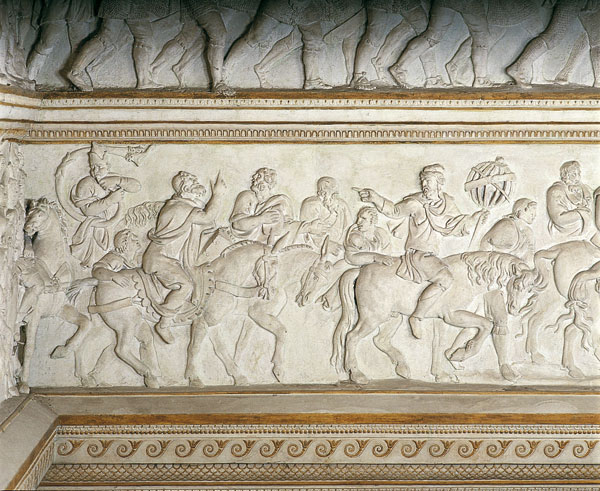 Created with high skill by Francesco Primaticcio and Giovan Battista Mantovano, probably between 1529 and 1531, the room is entirely decorated with elegant stucco reliefs.
The walls are lined with a double frieze showing a long procession of Roman soldiers marching. The composition, which extends for more than sixty meters and has about five hundred figures, can be observed from the end of the procession, set on the left corner of the upper part, on the South wall: here you can see the rearguard of the army coming out of an arch, soldiers, women and children, wagons with supplies. Moving along the procession, on the West wall, you will encounter the first of the soldiers armed with spears, then the standard-bearers. The North wall is dedicated to the representation of the soldiers wading across a river, archers and ensign-bearers. The top part finishes on the East wall, which has bowmen and lancers on horseback. The procession continues on the lower part of the South wall, where in the centre is depicted the Emperor on horseback giving orders with an outstretched hand, preceded by lictors and musicians on horseback.
Further along, on the West wall, you notice astrologers and fortune tellers. The march follows on the north wall with horsemen at the ford, a waggon with weapons and a camel loaded with luggage. The majestic scene ends on the East wall, where two squadrons of horsemen are riding at a full gallop.
The barrel vault is decorated with delicate bas-reliefs depicting the characters of myth and classical history .
In the recesses of the lunettes, the figures of Mars (West wall) and Hercules (South wall) are modelled in high relief. Winged Victories are depicted around them, arranged in a semicircle.
admin2019-10-02T18:06:42+02:00