Chamber of the Winds

Chamber of the Winds 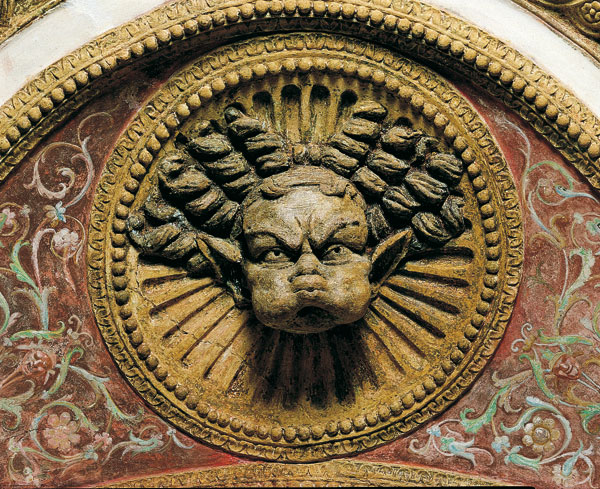 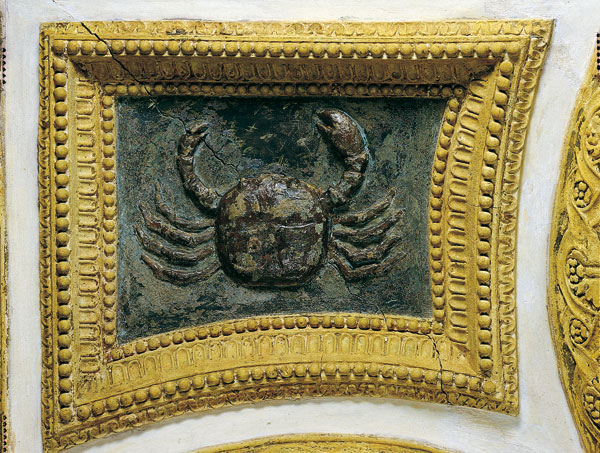 The room which dates back to 1527-1528, owes its name to the masks of the personified winds in the lower part of the vault. The room is dedicated to the theme of astrology. The motif of the influence the stars have on man’s destiny, is reflected in the inscription quoting the Latin poet Juvenal on the door of the south wall : ” DISTAT ENIM QVAE SYDERA TE EXCIPIANT ” (‘It depends in fact which stars welcome you [when you are born]’). The vault shows the device of the Olympus, surrounded by gods: starting from the hexagon with Juno on the chariot pulled by peacocks, on the right: Neptune, Minerva, Venus, Apollo, Mercury, Jupiter, Ceres; Mars and Diana are frescoed in the two hexagons at the sides of the central emblem, while Vulcan and Vesta are modelled in two stucco panels of the vault. Further down are zodiac signs, in stuccoes painted like bronze, alternating the personification of the months.
The influence of the constellations linked to the star signs is depicted in the round frescoes on the walls. Starting from the South wall:
Capricorn – Ophiuchus (‘Serpent-bearer’): “Snake Charmer”; Aquarius – Eagle: “Victorious general”; Pisces – Cetus (‘Whale’): “Fishermen of big fish from the deeps”; Aries – Ship and Dolphin: “Navigators”; Aries – Auriga (‘Charioteer’): “Shepherds’ Music ”.
West wall: Taurus – Bull’s Hoof : “Gladiators”; Gemini – Lepus (‘Hare’): “Hippomenes and Atalanta”; Cancer – Orion: “Hunters” .
North wall: Cancer – Orion: “Fishermen”; Leo – Canis (‘Dog’): “Hunters of the great beasts”; Virgo – Corona Australis (‘Southern Crown’): “The offering of garlands”; Libra – Sagitta (‘Arrow’): “The waterfowl hunting”; Scorpio – Ara (‘Altar’): “Priests” .
East wall: Scorpio – Centaurus: “Charioteer”; Sagittarius – Arcturus: “Prisoners”; Sagittarius –Arcturus: “Keepers of the royal palaces”. The fireplace is carved in Brentonico marble, the same stone used in the doorframes, and bears the titles and honors of Federico II.
admin2019-10-02T18:13:16+02:00