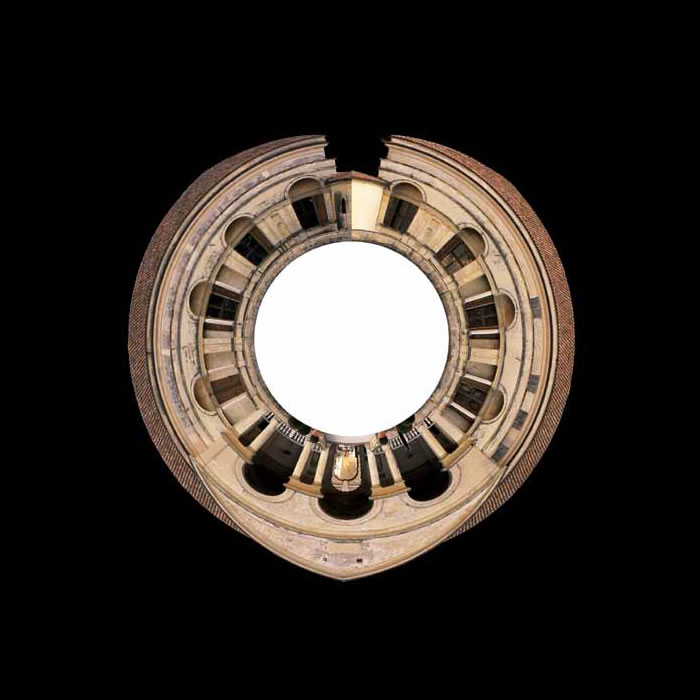 PALAZZO TE AT THE MIRROR
What future for the architectural heritage? Designing among photography_digital_survey for the enhancement of heritage

Exhibition at the Fruttiere of Palazzo Te, from January the 13th to February the 10th, 2013

Oscar Wilde in “The Picture of Dorian Gray” denounced the double face of beauty: eternal youth at the price of corruption of the soul. Nowadays, the risk befalling architectural heritage is the same: preservation of the monument at the price of its marketing. Which perspectives may arise from such a remark? Problems connected to the 70’s methodologies of preservation appear now as out-of-date due to the cogency of a much relevant problem: the unavailability of the finances needed to carry out even the most ordinary maintenance procedures. The critical urgency is shifting from a cultural to an economical dimension and the present times are not favorable ones. It is necessary, therefore, to make the management of the monument a previous step to its preservation, also for the reason that we understand that nowadays the economic management stands to preservation as oxygen to human life.
As people in charge, as being cultural operators before being economic ones, we cannot afford to be deprived of the coordination of the process, in order to ensure preservation to be regarded as a primary issue for architecture. How to carry this out? The purpose of the present exhibition is to create a doorway towards the future for architectural design linked to photography, to the digital world and to the survey for architectural heritage. The organization of exhibition and events might build up a flywheel for a marketing for historical architecture, Italian and world-wide, and it might become the main power source of fundraising for its preservation.
Palazzo Te’s architectural surveys, completed within Mantova’s City Survey and Design Laboratory referred to Milano Politecnico’s campus in Mantova (director Alessandro Bianchi), are the results of eight years of research based upon material survey of Gonzaga’s lands architectural heritage. The processing of digital techniques for the design is based upon an attentive inquiry on Luigi Ghirri’s photography and on his personal way of representing the Pianura Padana. The choice of lines, of scanning the land by measuring the “threshold” and of the necessity of grasping the daily feature of things – giving it importance – within the exceptionality of historical memory.
This is, nowadays, as important as it was before, in a continuity of the dynamic of values preservation, within forms and within the changing symbols. Both Giulio Romano and Palazzo Te are an excuse, they are the foreword and the outcome of a work of genius, which then just as much as now feeds the conscience of sensitive men, who in every age attempt to find a reason and a justification for their own existence. These reason keep on living tending to retrieve the way we used to be in the news of contemporary times, within the vital contradiction of styles and theoretic models, within the hybrid synthesis of cohabitation. The architectural surveys of Palazzo Te’s façades carried out by the aid of photographic techniques for the higher scale, are for philologists and detractors an opportunity for the development of further studies on Giulio Romano and his architecture, but also an excuse to claim that an instrument can become aim. An aim set in order to make a public not that interested in specialized
issues curious, in order to widen knowledge – even regarding marginal digressions – to a humanité like the one loved by Victor Hugo, the one of a daily-basis This is the only way to win the bet against public opinion’s apathy towards a common historical memory.
The graphic techniques adopted for the redaction of the panels, the graphic layout of masses, the use of color and of the dark background, are but only a glimpse of that synthesis researched within the Laboratory which drifts away from an attempt of depicting a fragment (like the façades picked one by one) as a story with an incipit, a development, an ending. Fragments try to reach an individual conclusion which eventually finds completion in the rigor of measure, of sought-after and revealed proportions, in the sequence of previous surveys, in the analytical evidence of morphological variations of the building through time. Half a millennium of extensions, restoration and maintenance created the image of today of Palazzo Te and the exhibited survey claims to be a photograph open to the judgment of posterity, of those who will be the judge of our present actions, free of preconceptions that matt our crystal ball.