Chamber of the Device

Chamber of the Device 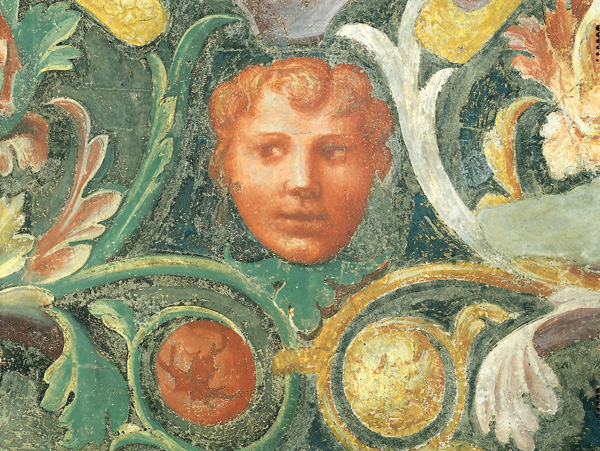 The room, similar to the previous one in space and ornaments, owes its name to the main topic of the frieze: the devices (heraldic emblems) of the Gonzaga family.
A device is a symbolic emblem made up of an image (called the “body”) and a motto (called the “soul”) through which virtues, love, moral principles and important personal events are enigmatically and ideally expressed.
From the entrance wall, moving towards the right, the accomplishments are: Cupid in the Wood, Melting Pot, Wings, Turtle Dove, Iron Glove (West wall); Dogfire/ Fireplace lift (North wall); Belt, Mount Olympus, Muzzle, an emblem still not identified, Tower, (East wall); Sun, Gonzaga Coat of Arms, The Green Lizard (South wall).
The most frequent devices shown in the palace are The Green Lizard and Mount Olympus.
The first, accompanied by Latin the motto “Quod huic deest me torquet”(“What this [creature] lacks torments me”) refers to Federico II Gonzaga”s passion for his mistress, Isabella Boschetti, contrasting with the reptile’s cold blood. The second, accompanied by the motto “Fides/ΟΛΥΜΠΟΣ” (“faith/Olympus”), expresses the concept of loyalty to those ashes that lay still on the alter at the top of the mountain.
The red and yellow Verona marble fireplace showing The Green Lizard’s device shows the inscription: “F[edericus] II M[archio] M[antue] V” ( Federico II, 5th Marquis of Mantua).