Chamber of the Sun and the Moon

Chamber of the Sun and the Moon 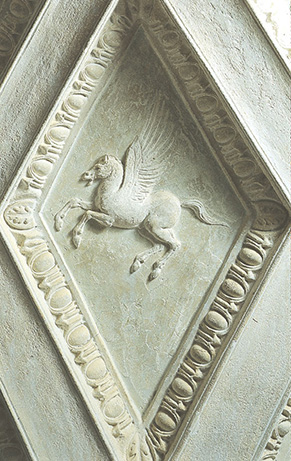 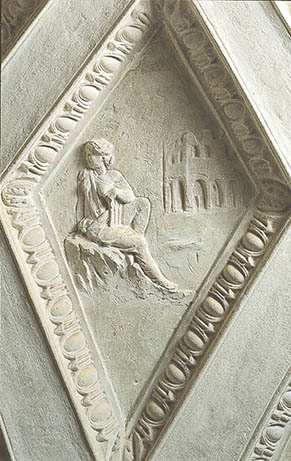 The room owes its name to the fresco at the center of the vault, where the chariots of the Sun and the Moon are painted. Called “salotto” (living room), this room was used to show guests into the more private rooms of the Devices and of Ovid. At the top of the net vault a perspective background opens, depicting the allegory of the chariot of the Sun at sunset and the chariot of the Moon coming up. The allegory represents the continuous passing of time. An old tradition stated that the fresco had been painted by Francesco Primaticcio, the most brilliant of Giulio Romano’s apprentices (1504-1570). Even though there is no real proof, the quality of this masterpiece is enough to sustain this theory. The new perspective from below was greatly popular among artists in the XVI century. The vault is decorated by 192 lacunars (128 lozenges and 64 triangles) at the edges of the composition with plaster reliefs, on a turquoise background, showing men, animals and the devices of the Green Lizard and the Olympus, which was among Federico Gonzaga’s favorites emblems. The figures are inspired to the classical antiquity: coins and gems of which Giulio Romano was a collector. The ceiling and the top frame, like the other decorations in this part of the palace, are datable back to 1527-28. The reliefs in the inferior part of the room, date back to the XVIII century: they are reproductions of plasters of the XVI century found in other parts of the palace, or moulds taken from ancient Greco-Roman originals (the casts of sarcophagi at the center of the longer walls).